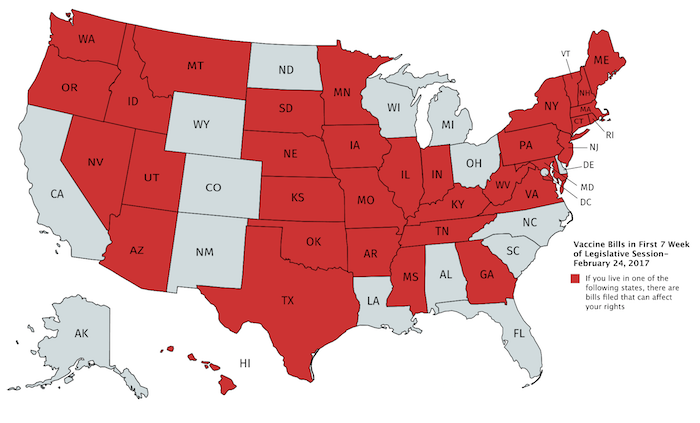 In 2015 California signed into law the highly contested Senate Bill 277 (SB277) accomplishing two outcomes. First, the bill eliminated the personal belief exemption for vaccination. Second, the bill’s actionable directives served as a sobering wake up call that mobilized the public and medical community to enter the fight for an evaporating health freedom and informed consent.

Yet, despite multiple whistleblowers within the Centers for Disease Control and Prevention (CDC) spotlighting research corruption and pharmaceutical industry collusion, over $3 billion dollars paid out in vaccine damages by the Vaccine Injury Compensation Program, widespread vaccine contamination, and overall ineffectiveness and dangers of the current vaccine schedule there has now been 134 vaccine bills introduced in 35 states in the first seven weeks of the US legislative session.

According to the National Vaccine Information Center’s (NVIC) Advocacy Team who track vaccine-related bills, 31 new bills have been added since the team’s last update two weeks prior. Eight of these new bills are in five states appearing for the first time. The coordinated legislative push represents nothing short of a full frontal onslaught by pharmaceutical companies, working through their lobbied politicians, to force dangerous vaccine products upon the backs of the entire US population.

The Slippery Slope of Legalized Persecution

Perhaps the most disturbing trend and telling takeaway from this new surge of vaccine-related bills within the US is the clear move to legally persecute those choosing to not vaccinate. The new structure to implement vaccine persecution is appearing in two different forms. First, Connecticut, Idaho, Kansas, Massachusetts, Montana, New York, Texas, and Utah have filed bills to expand vaccine tracking or eliminate opt-in consent for vaccine tracking. Second, Arizona, Connecticut, Nevada, New York, Oklahoma, Texas, and Utah have filed bills that would allow ‘school shaming’ by requiring and normalizing the public disclosure of vaccination and exemption rates. Nevada has gone one step further than the rest by introducing AB 200 allowing parents to find out from the school if any children who are not vaccinated are attending.

In the current atmosphere of increasing persecution of those who exercise their medical choice, public disclosure by law opens the gates to community-driven discrimination at all levels, endless local and national media harassment, and mounting pressure on local health professionals to increase community vaccination rates at all costs. If passed and signed into law, Arkansas Senate Bill 301 will allow health departments to share personal information in the immunization registry. In the past, families and their children who wished to exercise their right to health freedom and not vaccinate have endured an increasing trend of vilification by the corporate media, mainstream medical profession, school systems, and the public at large. The recent trend has also seen doctors refuse to treat patients, or kick them out of their practice, for not being vaccinated and/or not signing their in-house “immunization contracts.” Corporate media has myopically focused on the dangers unvaccinated people pose to the ‘herd’ while willfully censoring epidemic rates of autism spectrum disorders, documented vaccine dangers, and multiple CDC whistleblowers warning of research fraud and pharmaceutical industry collusion.

A look back at the government, medical, and media talking points over the recent years has seen a three-part progression bringing the public to the current, openly admitted, stage of green lighting the establishment persecution of the unvaccinated. At first, the message was to simply vaccinate to prevent disease. Due to multifactorial events, the original messaging fell out of favor and was changed to ‘vaccinate to protect others.’ The ‘protect others’ collective approach symbolized a giant leap away from the individual and their health freedom while attempting to put ‘herd immunity’ and the greater good front and center to neutralize personal choice. We have now officially entered a third turning which has historically alarming consequences. Persecution, written into law, of groups of people for their beliefs goes well beyond the once slippery slope the health freedom community found themselves on in the past. The two-pronged approach of increased tracking and monitoring of unvaccinated individuals along with social and legal momentum to denounce the unvaccinated as threats to society and life itself are simply reprehensible and historically chilling.

Connecticut, Texas, and Utah have introduced new bills that require families that utilize vaccine exemptions to participate in a state-sponsored vaccine (re)eduction program. The discriminatory and presumptuous bills assume that those who exert their medical and parental choice are uneducated and ignorant. For the increasing populations of people that believe in health freedom and understand that vaccines are not necessarily safe or effective, attempted bills to force “education” are a sign that pharmaceutical companies and their paid/lobbied mouthpieces have lost control of the narrative and messaging.

Doctors will not be immune from the targeted persecution. In California, where SB277 is law, the 2015-2016 Annual Report of the Medical Board of California officially states:

“The Board will investigate any complaints in which a physician may not be following the standard of care…”
Individual physicians will face a new angle of pressure to meet the “standard of care”
as new bills are introduced to track, share, and publish vaccination data as well as restrict or eliminate vaccine exemptions. The National Committee for Quality Assurance (NCQA) collects data and issues “report cards” on health plans which meet “important standards of care.” Put simply, The NCQA ratings for health plans are partly dependent upon their ability to deliver pharmaceutical products. If the new bills chronicled by NVIC are signed into law, doctors wishing to allow vaccine choice or using their medical judgement in cases involving vaccine waivers may face a medical board investigation from their respective state. In addition, health plans being rated by the NCQA will likely put pressure on participating doctors who are not fully vaccinating all their patients. The good news is that doctors are now uniting to oppose mandatory vaccination laws, and educate the public on infectious disease, the immune system, and informed consent as seen with the recently formed group Physicians for Informed Consent.

The NVIC Advocacy Team also gave good news by listing and encouraging support for new bills filed in Hawaii, Iowa, Indiana, New Jersey, New York, Oklahoma, Rhode Island, Tennessee, Texas, Washington, and West Virginia that will add or expand vaccine exemptions. As the tide continues to turn, the public is witnessing bills that are not pharmaceutically driven showing that some legislators and authors behind such bills do indeed stand for their constituents. Due to activist who are doing the leg work legislators are listening to their constituents, accepting their documents and materials, and using their arguments on the floor to debate.

NVIC launched the vaccine safety and informed consent movement in America in the early 1980s and is the oldest and largest consumer led organization advocating for the institution of vaccine safety and informed consent protections in the public health system. Their Advocacy Team is doing the vital work of continuously monitoring newly introduced bills and their movements. It is recommended that those interested in alerts of new vaccine-related legislation and contact information to engage with their state’s decision makers and legislators sign up for free at the NVIC Advocacy Portal.

Jefferey Jaxen is a researcher, independent investigative journalist, writer and voice for health freedom on the front lines of society’s shift towards higher consciousness.  Visit his website here to learn more.