Almost 60 million root canals are performed a year (1), on individuals who are mistakenly informed that it is a safe and harmless procedure. While your teeth may look and feel fine after the procedure, the reality is that it is impossible for all of the bacteria to be removed from the tooth. After a root canal, the healthy bacteria changes to highly toxic anaerobic bacteria that will continue to thrive inside and around the tooth causing numerous health problems.

Dr. Weston Price
Dr. Weston Price was a brilliant dentist and researcher who studied the relationship between nutrition, dental and physical health. In their studies, Dr. Price and the Mayo Clinic discovered that bacterial growth in root canals could be transferred to animals to recreate the same diseases the human donor. Their tests proved successful in 80 to 100% of the animals. In particular, heart disease could be transferred 100% of the time (1, 2). It’s shocking to find out that as far back as 1910 Dr. Price and the Mayo Clinic found that bacteria and the toxins from root canals could enter the bloodstream and thus travel to any point in the body and create disease to that particular tissue or organ. (1, 2). Price went on to discover that numerous degenerative diseases have their origin in root canal procedures, the most frequent are circulatory and heart disease. Although his research was buried and hidden from the public in the 1920’s, Dr. George Meinig would discover his work 70 years later and bring it to the forefront through his book, Root Canal Cover Up. 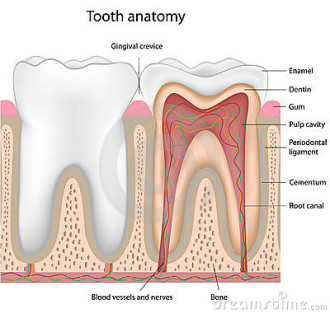 Basic Tooth Anatomy
A tooth has multiple layers, the enamel is the outer layer, the second layer is the dentin and the inner core is the pulp. Tiny fibers come out of the tooth and intertwine with fibers coming out of the bone, and they unite to form what is called the periodontal ligament. The dentin layer is not solid, but is actually comprised of tiny dentinal tubules, that if stretched would be approximately three miles long. This is an excellent place for bacteria to hide and develop. In fact when Weston Price did his research, this is exactly where he found anaerobic bacteria in the thousands of teeth he tested. (2) Since it is impossible to sterilize these accessory canals it becomes a haven for bacteria to grow and develop. As bacteria multiply and create infection it will oftentimes extend down into the jawbone where it creates cavitations—areas of necrotic tissue in the jawbone itself.

Commonly Found Bacteria in Root Canals
The ADA may claim that bacteria found in teeth with root canals can’t cause disease, but the bacteria found in root canaled teeth are not the same normal bacteria found in your mouth. Without oxygen and nutrients the friendly bacteria become highly toxic, capable of causing long term infection, jawbone loss and numerous diseases.

In Hal Huggins article on Root Canal Dangers, he shares the following information on the five major bacteria species (out of the fifty –three that are commonly found in root canal teeth).
Capnocytophaga ochracea: Found in brain abscesses associated with dental source of infection. Causes human disease in the central nervous system. Also related to septicemia and meningitis. (4)

Porphyromonas gingivalis: Destroys red blood cells by drilling holes (porins) in them, causing the cell to bleed to death.” Low red cell counts that do not recover after dental revision are frequently responding to the porin activity of this microbe. P. gingivalis also alters the integrity of the endothelial lining of blood vessels, which leads to inflammation and bleeding in the inner lining of blood vessels. According to Dr. Huggins this is the key step in formation of atherogenesis that leads to heart attacks. P. gingivalis can change friendly bacteria into pathogens.(9)

Chronic Disease Linked To Root Canals
According to Dr. George Meinig, (one of the founders of the American Association of Endodontists) and author of Root Canal Cover Up, a high percentage of chronic illness can originate from root canals, the most frequent being circulatory and heart disease. The next common diseases include those affecting the joints, such as arthritis and rheumatism. Next are diseases that affect the brain and nervous system such as ALS and MS.

Conclusion
It is important to do your own research before any surgical procedure and treatment plan. A root canal is a surgical procedure. The decision on whether to have a root canal or remove the tooth is best made between you, your doctor and your biological dentist. Establishing an appropriate pre and post procedure protocol can expedite your recovery process.